If I claimed this to a definitive guide to party packs I’d basically be saying that I’m Martha Stewart.  And we all know that’s about as true as saying Saturday Night Live is as funny as Jimmy Fallon – not even close.

Yesterday my daughter got a party pack and after posting a picture of its contents on my Facebook Page and Instagram feed it got a lot of mixed reactions from the people that it matters to the most.

Not the kids silly, the Moms.

There was a lot of chatter but I think we can break it down into two separate groups which are:

Honestly I think both have merit.

The way parties are thrown nowadays, the actual party is an “event” and not just an informal gathering of friends to celebrate the birthday of the child.  The amount of effort/time/money/food/planning/blood/sweat/tears*  that goes into planning a party warrants the invite to be a thank you in and of itself.  As Nicki mentioned, having kids come and demand their pack at the end of the party is just rude and entirely ungrateful.  I absolutely agree that this is ludicrous and if anything it should be an extra and not an expected.

*(are those last three just me?)

And what about school?  If your kids are having a party at home AND sending packs to school you’ll eventually be spending a small fortune giving other people things instead of investing that money in your own child who happens to be having the birthday!

If you have been around here for a while you’ll know that I fall into the other category.  As evidenced here, here, here, oh and here. Flip, here too.  I looooove parties and all that goes with it. 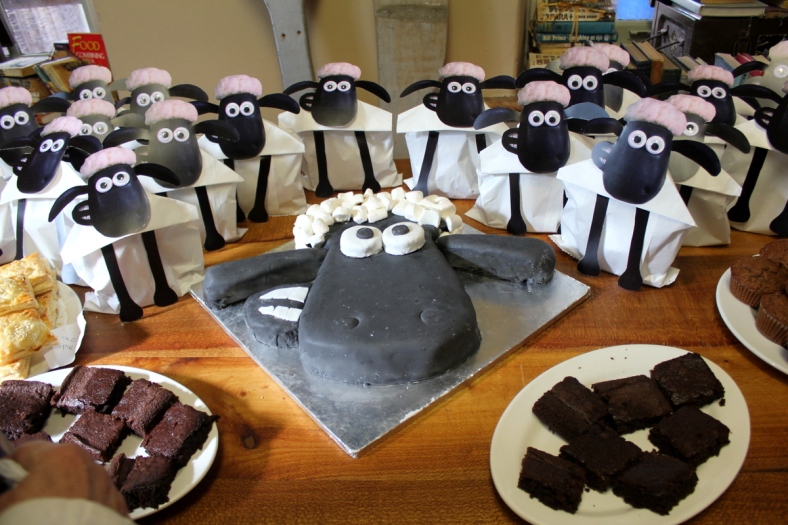 Give me a theme and the first thing I think about is the party pack.  Maybe I’m a sucker for punishment or whatever, but I LOVE doing it and maybe I feel a little obligated, but damnit if I’m feeling obligated I’m going do it the way I want to.  Elaborate and totally on theme.

And if you thought that breaking it into two was the easy part.  You’d be wrong.

Here’s a little guide to getting the party pack right:

Don’t get me wrong, I’m no scrooge.  Although we try and stay away from sugar, we do let them have the occasional treat.  I get the moderation thing and keeping it to dish out later, but if you take into account our current culture if it’s not party packs, it’s school parties, weekend parties or grandparents (and sometimes I want to be the one giving them fun things instead of taking it away from them) – at that rate they’ll be eating sugar ALL THE TIME.  Which let’s face it, is just not on.

Actually what we’ve started doing is making the party pack for consumption AT the party.  Is that cheating?  So be it.  It saves on doing everything twice.  Basically all the food is catered for with the adults in mind and then the party packs take care of the kiddie things and ensures everyone gets one.  Or something fun for the family to do/enjoy together when they get home – like the brownies in a bag that we sent home with the girls Baking themed party.

So there you have it.  Go forth and party – with or without the party packs.

When You Get That Call From School

I loved reading all the comments on facebook yesterday

I enjoyed the commentary on facebook yesterday and even throwing in my organic mommy comment. This post is so well written and i really relate to it.

Great post Cindy – and I couldn’t agree more! I love parties and themes and party packs too – but everything in moderation is key for us too x

I think I’d have died a little inside if Fysh came home with a party pack like that, thankfully he knows he’s not allowed any “bad sugars” so he wouldn’t pile into it but still, I mean how many kids have that self restraint. Can you imagine the damage a pack like that could do?
I like giving a party pack, I don’t always but when I do I’m with you on the keeping it minimal and simplistic when it comes to contents.
Parties are about the kids and celebrating another year, they’re not about how much sugar a child can consume in the space of an hour or two.

I have cut down drastically on the contents of party packs for my kids parties. The big kids choose what they want but for the babies I do small things. I have done personalised biscuits, a small toy that fits with the theme. I actually cant remember when last I packed a box full of sweets!

Thank you for the tips, I will bear them in mind next time around. I generally try to do a craft activity at the party such as painted clay pots, or fabric painted T shirts, they then take this home instead of a party pack. We also get a helium balloon for each child, up until now I have never done party packs, but because they are the norm my children are not entirely happy with that.

Yep! You have got all the comments together nicely in this post! Thanks for another lovely read 😀 xx

I enjoyed this post even though I’m not a mom. I totally agree with you about too many moms going way overboard with the contents (especially the amount of sweets). I come from a generation where we used to get party packs filled with so many sweets you could not even finish it in a week – and now I’m an adult stuck with an addiction to sugar I cannot get rid of (in spite of the fact that I’m already Diabetic).

I agree with you about the 5 treats maximum and I also agree that there are enough things besides sweets or sugar laden treats that can go into a party pack.

I really love your sense of humour.

I don’t always respond to your posts but love reading them.

Looking forward to the next one.

I also like party packs and thinking about themes. I agree to keeping sweets to a minimum. Especially for a young child it is just a waste.

I like this post, had a discussion with friends the other day as we mostly just throw party packs in the bin as the china sweets taste awful, yet I feel sorry about it as I know the moms have spent time and money on them. Personally we don’t really do party packs. With my daughter’s 4th birthday each kid got a box of sparkles to take home. Feedback was that the kiddies really enjoyed them and the moms were grateful for not having to take home a bag of sweets. The year before we had a treasure hunt and the kids got to take home what they found, it was a Tinkerbel party so the treasures were ‘pirate gold’, fairy dust, bubbles etc. I love doing themed parties, and there is always a little something to take home even though it isn’t a party pack as such.

[…] Let’s start at the party packs – I bought these colourful D.I.Y party boxes at Merrypak and printed out some labels to stick on. I am going to be very honest – I can’t remember exactly what I put in these things (party boxes aren’t exactly the most exciting part for me), but here is a wonderful guide from Cindy about what to pack in your party boxes! […]

I used to do party pack at the party idea. It worked but often it would get left behind with everything the child did not eat or like (or the mommy). So now I do candy buffets and you get a little bag to take home what and as much as the mommy (or the child for the 10 year olds – no mommies at the party) wants or allow. They make the decision what goes it. As to crayons, clouring books etc I do think the party is enough on its own. In the past we have done small things like playdough – I have also given badges last year with the boys’ but I had them and it suited the theme. I have also made rosettes with each childs name – that was very popular.

For school I send ice creams these days – and just that. The kids seem to love it.

Oh and btw – the brownie in a bag idea for the chefs party was brilliant!

Great post! I have also done eat the party pack at the party and have a little take home for each child. I think the parents appreciate the control in what the kids get to eat. Also definitely more of a fan for the healthier alternatives. Some of the party packs my daughter has come home have scared me to death!

that is one expensive party pack! if my children get sweets they can’t read they put it directly in the tub for the nanny or the top of the bin bag, whichever comes first.

[…] Let’s start at the party packs – I bought these colourful D.I.Yparty boxes at Merrypak and printed out some labels to stick on. I am going to be very honest – I can’t remember exactly what I put in these things (party boxes aren’t exactly the most exciting part for me), but here is a wonderful guide from Cindy about what to pack in your party boxes! […]

[…]  Trying to come up with cost effective ways to decorate and make up party packs.  (We all know my stance on party packs so ja, it’s difficult to find something theme related to pop in there – but I might […]

I love this post. For my son’s first birthday I did a simple milkshake and cookie with a fun diy activity kit.

Especially those party packs that are almost nuclear. I am gracious though, or I try to be.

Great post. I don’t do party packs but have a craft activity at the party, they children then take home what they have made

Thank you for your wonderful article. I am planning a 4th birthday for my son and last year we went a little bit nutso with the party packs, since he didn’t have an “actual party”, just a celebration at school with cupcakes and party packs. I felt I needed to “make up” for the fact that there was no “real” party, so spent hundreds on the contents of the party pack and also hours packaging them all for the nearly 30 children in his class. This year, I am absolutely sticking to the 5 items rule you’ve suggested, will make one of them a small pack of crayons to colour in the pre-printed characters from the party theme I’m sending along and definitely a juice. That narrows down what else I need to get quite considerably, so thanks for giving me LESS to worry about for once!