Behind The Scenes Of A Mixed Race Family – Melanie Blignaut

In case you’ve missed it, we’ve started a new series that will pop up here on the blog every Friday.

Recently I have been inundated with content about racism in every shape and form – from issues with mixed race parents or cross racial adoption to being asked to write about it on Heritage Day.  There is just so much that we could say on the topic as it’s still touches a very raw nerve in South Africa (and rightfully so).

Besides the odd intentional racist, I feel like a lot of the hurtful comments are actually just brought about through ignorance.  Thinking only of our own personal situations with little regard for others, because that’s all that we know. So in an effort to broaden what we know, I thought I would interview a wide range of South Africans that have a variety of different situations – from mixed race couples to single race couples that adopt cross racially to couples that share the same “race” but differ vastly in terms of culture.  A bit of a mumble jumble of everything really.

So let’s get started!

Today we’re meeting Melanie who is married to someone that you may recognise!  Get your cup of the good stuff ready and enjoy!!

I’m a 30-something wife and mom. I work from home (blogging and writing). I also tutor and teach preschool drama part-time. I don’t get a lot of me-time anymore, but when I do, it’s usually spent curled up in bed with a cup of tea and a good book. I’ve recently re-discovered an enjoyment of knitting and one of my goals this year is to learn to crochet.

My husband, Jacques, is an actor. He likes his gadgets – iPhone, iPad – and loves watching and collecting movies. He’s studying theology part-time this year, so he’s had to squeeze in a lot of study time.

Jacques is coloured (with a mixture of French, Indian, Dutch and Khoisan ancestry). I am white (with Dutch/French/Irish ancestry). Both of us were raised bilingual, but Jacques’ family is predominantly Afrikaans-speaking and mine is predominantly English-speaking. Both of us were raised in Christian homes; Jacques grew up in the Congregational Church and I grew up Baptist. I blogged about this last year.

We live in in Johannesburg. I don’t think how we are accepted really changes depending on where we go. Of course, it’s entirely possible that I am just completely oblivious to any negative glances. Because of Jacques’ character’s popularity, we do get quite a bit of attention, especially in Afrikaans areas. 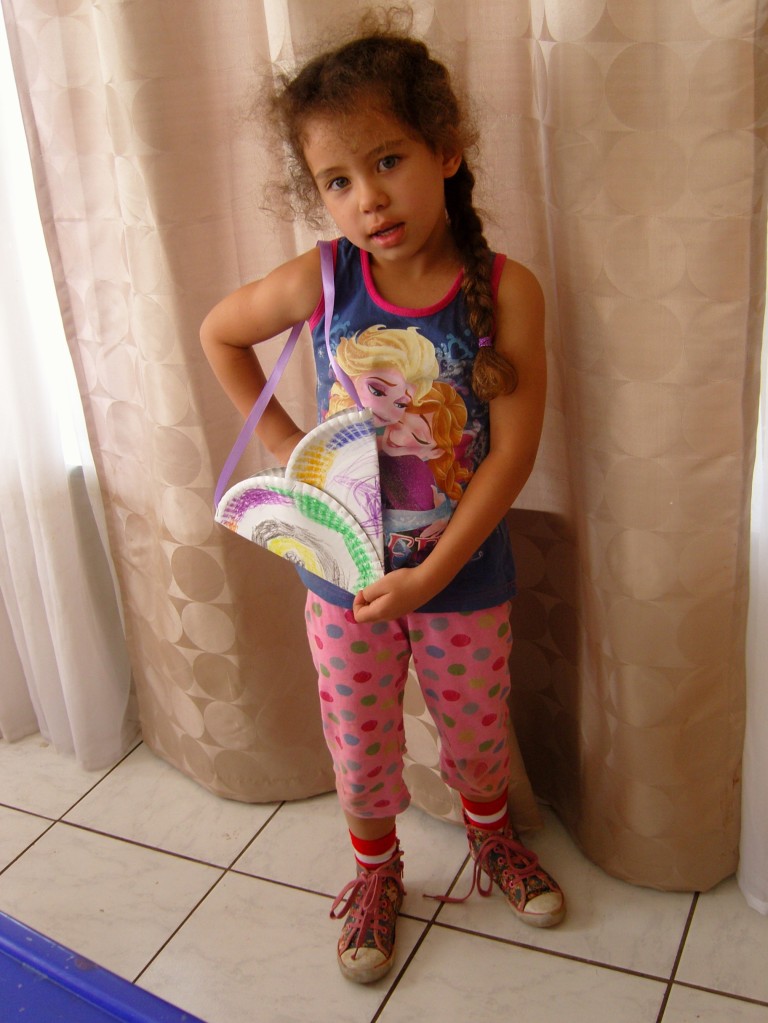 Angie is four (going in 14). She’s a deep thinker and notices absolutely everything. She also remembers everything and asks a lot of questions. She’s a sensitive child, and very much a girly girl. She’s obsessed with Frozen, princesses, getting married and children, and must always wear skirts or dresses. She and her sister are strong-willed and oh-so-independent. Emmy is two and a ball of energy. She’s our wild child who has absolutely no fear. She’s in a copycat stage and does everything Angie does. She is also our human alarm clock – if we sleep later than 5:30 then that counts as sleeping in.

When we first met and started dating (15 years ago) I think it was more of a thing. First, we met studying drama at Wits which was already something my family struggled with. Then my mother’s first introduction to Jacques was watching him perform “The Handbag” – not the best first impression, I’ll admit. It didn’t help that our relationship was initially so on and off. But they got used to the idea, and by the time we’d reconnected with each other in 2008, they weren’t at all opposed (or even surprised) when we got engaged.

I don’t think race really features in our marriage. I don’t think of him as “my coloured husband” or the girls as “my mixed race kids”. Sometimes I’ll look at our joined hands and admire the contrast, but it’s not a big thing at all. Last year Angie started to become aware of the differences in our skin tones. She asked about Daddy’s dark face and Mommy’s light face. We told her God had made us different, just like he made different flowers, because different colours are beautiful.

I don’t think so. We share the same faith, which is the most important thing in our marriage.

As I mentioned before, my family was initially hesitant, but once they had gotten to know Jacques well, they were absolutely okay with it. Jacques’ family was always very welcoming. (I wasn’t his first white girlfriend.)

Mostly positive. People tend to recognise Jacques when we’re out. Most of the comments we get are to do with our daughters’ curls – which I am so jealous of! – or how pretty they are. I almost wish people wouldn’t say that, because while I want them to feel pretty, I don’t want it to be all that they’re noticed for. Most of the time, when we’re out with the girls, my attention is focused on keeping them from running off or dancing on the restaurant table so I don’t notice attention from others.

Once, and it really was just once, a man commented on Angie’s wild hair. His words weren’t unkind, but his tone was. (And, really, he was in no position to comment with his own rather dodgy hairstyle.)

I don’t like conflict, so I would just ignore it. Fighting or getting upset isn’t going to make anyone change their tune. Responding in love is the quickest way to disarm someone. So, shake it off and enjoy your family.

I don’t think my fears were involving mixed race children, but rather just parenting children in general. There are fears specific to raising daughters in our country, but the best – the only – thing I can do with my fears is to take them to God in prayer.

Don’t worry so much about what is outside your nuclear family. The only opinions that matter are those of your spouse and children. If you feel that you can’t deal with it, talk to a supportive friend.

Thank you Melanie for joining in on this series!

If you’re in Cape Town and want to stand up to racism in our City take the pledge here.

I am really loving this series Cinds. Also, what a gorgeous looking family and incredible words.

Oh gosh, my mom loves your hubby and his character! And you have to admit your girls are beautiful and will be noticed.

I loved this! Such great positive stories! And your girls are gorgeous!

Loved this post! Mel is a great social media friend of mine and feels like I’ve known “Vince” forever 🙂 Your girls are so beautiful! REALLY love this series Cindy, so cool!!

Amazing friends, they have the biggest hearts ever. Beautiful girls!!!

“Don’t worry so much about what is outside your nuclear family.” – BEST ADVISE EVER!!!!!! For everything!